The Big Impact of Small Cells

In July of 2021, more than 60,000 fans flooded the Deer District outside Fiserv Forum to watch the Milwaukee Bucks win their first NBA championship since 1971. Although Giannis Antetokounmpo claimed the Finals MVP Award, the Deer District had its own MVP: reliable data coverage for fans posting photos and videos of their post-game shenanigans on social media.

High traffic gathering areas—like the Deer District—and new outdoor amenities are gaining steam around sports venues nationwide. “If you build it, [they] will come,” says 1989’s sports classic Field of Dreams. But fans may not come back to these spaces if venues can’t offer enough network bandwidth to support their needs.

How then can carriers, event venues, and municipalities provide sufficient cell phone data for these congested areas?

For Fiserv Forum and sports venues across the nation, small cell equipment is the answer.

Small cell installations consist of wireless transmitters and receivers mounted on poles, streetlights, or buildings. Unlike macro sites, small cells are barely noticeable to the untrained eye. Although different implementations call for different equipment, many small cells are a little bit larger than a shoebox and a little bit smaller than a laundry basket. Small cells may be, well, small, but they pack a punch. Small cell networks are connected by fiber optic cable, which allows them to process large amounts of data at rapid speeds.

Small cell technology is designed to serve busy areas, such as bustling metropolitan centers and crowded event venues. In these areas, macro sites must compete with taller structures to transmit data. Thus, small cells are designed to fill coverage gaps. While macro towers may be built miles apart from each other, small cells are often installed within blocks of each other. In this way, small cells facilitate demand and supplement 5G networks so that users can make important calls or stream the latest movies and TV shows—regardless of location or crowd size.

As carriers implement and strengthen nationwide 5G networks, small cells have an important role to play. This type of telecommunications infrastructure also presents unique challenges for carriers, engineers, and municipalities.

Given the benefits of 5G coverage, many municipalities and venues are open to small cell implementations—provided the equipment blends in with its surroundings. This consideration is especially important for sports venues, which often want small cell installations to match their existing infrastructure. The challenge for telecommunications designers then is to maximize the impact of small cells without disturbing the environments in which they’re installed.

For Ramaker’s telecommunications team, responding to this challenge requires two things: putting the firm’s decades of experience to work and leveraging its close relationships with light pole manufacturers. By applying industry knowledge and collaborating with strategic partners, the firm designs reliable equipment that optimizes network performance.

Transmission, proximity, and safety are top of mind for today’s telecommunications designers. All these factors influence the site selection and acquisition process for small cells.

“The 5G antenna signal is unable to transmit through really any object, so it needs to be close to the target area with direct line of site,” says Josh Opseth, P.E., Telecommunications Project Manager at Ramaker.

Take, for instance, The Beer Garden at Fiserv Forum. The popular gathering place for Bucks and Brewers fans features 20 taps and more than a few obstructions for small cell equipment. These obstructions interfered with coverage, especially for guests seated farther away from the existing infrastructure at Fiserv Forum. Ultimately, Ramaker provided design and engineering services for the installation of new antennas and equipment on The Beer Garden’s steel beams, increasing access to fast and reliable data for taproom customers.

Ramaker has cultivated relationships with municipalities throughout Wisconsin to ease the permitting and site acquisition processes. Ramaker’s ability to provide all site acquisition, design, engineering, and permitting services in-house allows the firm to serve as a one-stop shop for small cell developments. By combining a range of capabilities, Ramaker simplifies project management, increases efficiency, and cuts costs for clients.

A multidiscipline architecture and engineering firm based in Sauk City, Wisconsin, Ramaker has designed tower sites across the continental United States, as well as in Hawaii, Alaska, and Puerto Rico. Learn more about Ramaker’s telecommunications consulting services at www.ramaker.com/telecom-experience. 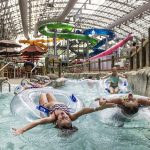